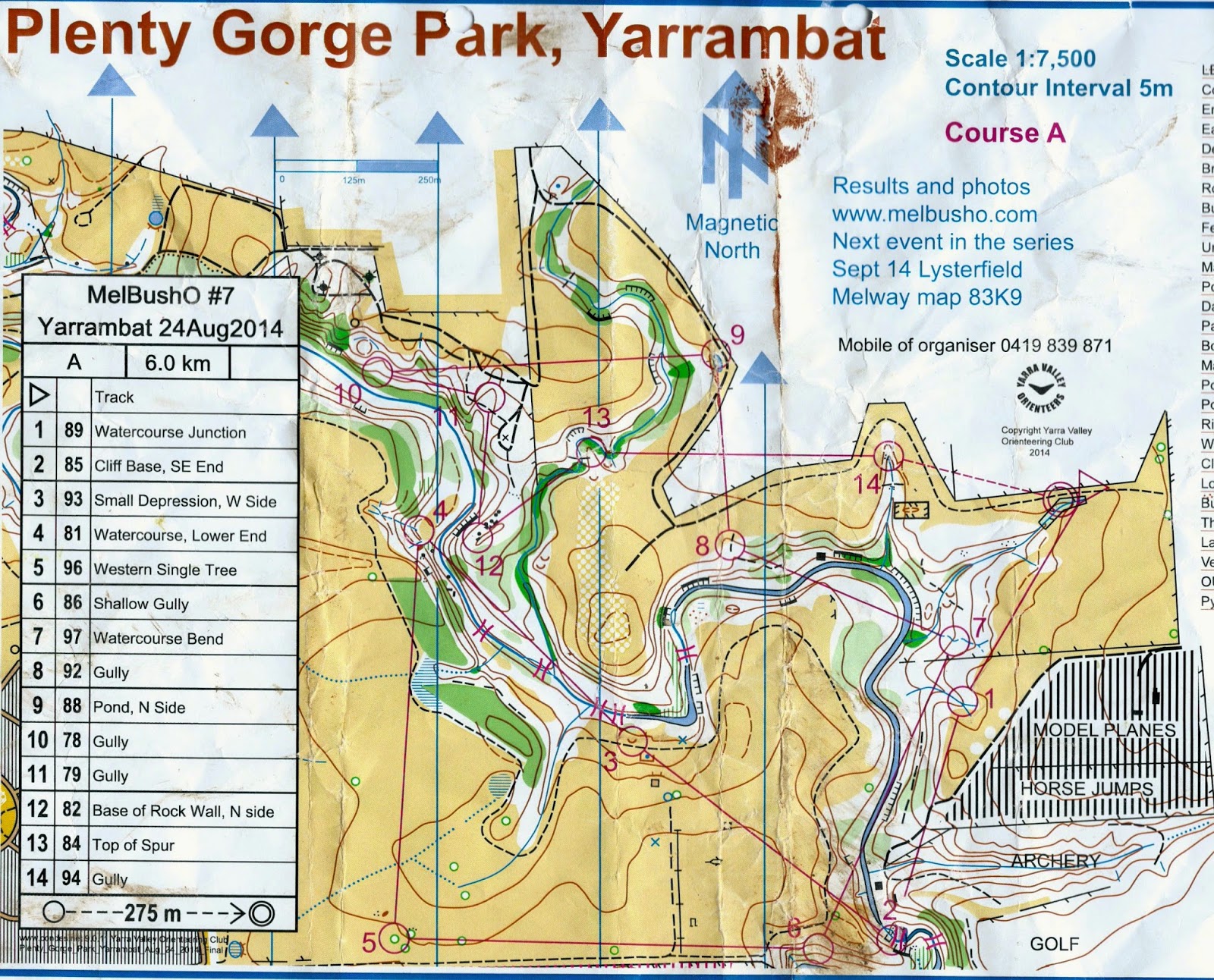 The MelBushO Series has been a highlight for me this year with a taste of many different areas and a sharp increase in the kangaroo count. I thought I’d been to this part of Plenty Gorge before but I hadn’t. An excellent turnout of 130+ folks joined us on a sunny Sunday morning. Pat and Susi entertained the kids while Mark and I set about our courses, he on the 4km B while I tackled the 6km A.

An uncrossable barbed-wire fence was an initial surprise on the way to my first control, although a kindly tree had fallen across it and I used this to scramble over the jagged wire. The second leg took me down to a river crossing where Russell was on hand to navigate me across the swirling waters. My third control I found buried under a fallen tree after more lost time. Slow going up to now.

I’d been softened up for my first big mistake. I decided to follow the path to #4 when straight would have been much quicker, as I realised when meeting later starters here. Four long minutes evaporated here. A long slog on a compass bearing to the next, then follow the path to #6, all the while overtaken by younger legs. Now back to the river crossing and over the barbed wire again to #7. I followed the river but kept high to the next control. 9-10 provided the most difficulty, having to go direct through steep and hostile green stuff which proved a lot tougher than expected. Everyone else suffered similarly here. My brains were now cooked and an easy leg to the last control cost me three minutes when I left #13 in completely the wrong direction. So a long 82 minutes should have been an almost-as-long 75 minutes.

Despite the physicality, I enjoyed a proper orienteering event. Eight MelBushO events this year may be expanded, I hear, for 2015. Let’s hope so!
Posted by Dennis Mews at 02:13 No comments: 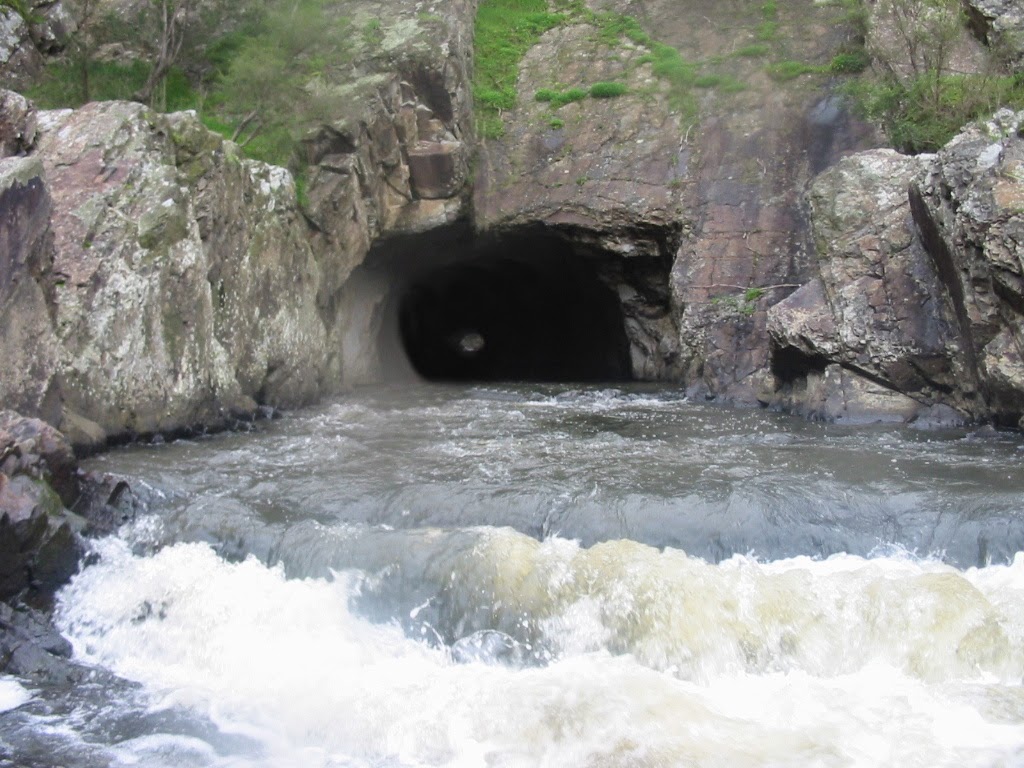 Pound Bend Park lies on a bend of the Yarra River, notable for the 145 metre-long tunnel which was dug out by 19th Century miners to divert the flow of the river, making the whole of the river bend more accessible for gold panning. Like so many schemes of the time, the pickings barely paid back the expenditure.

The park is quite small and has limited technical challenge, but is made extremely attractive by its location only ten minutes from our house. I hadn't been there before, but I will certainly return. Planner Ruth took the view that it would not sustain a viable orienteering event every year, but since this series is aimed at newcomers (or which there were many) I'm not so sure.

We looked after Claudia and Max while their parents ventured out on their courses. We collected sticks, counted ducks on the fast-flowing river, played hide-and-seek in the bushes, all the while looking out for the parental return. Both came back in three-quarters of an hour, in time for us to change and prepare for our own efforts. I decided on the Big Boys course again and Pat registered for the C course. 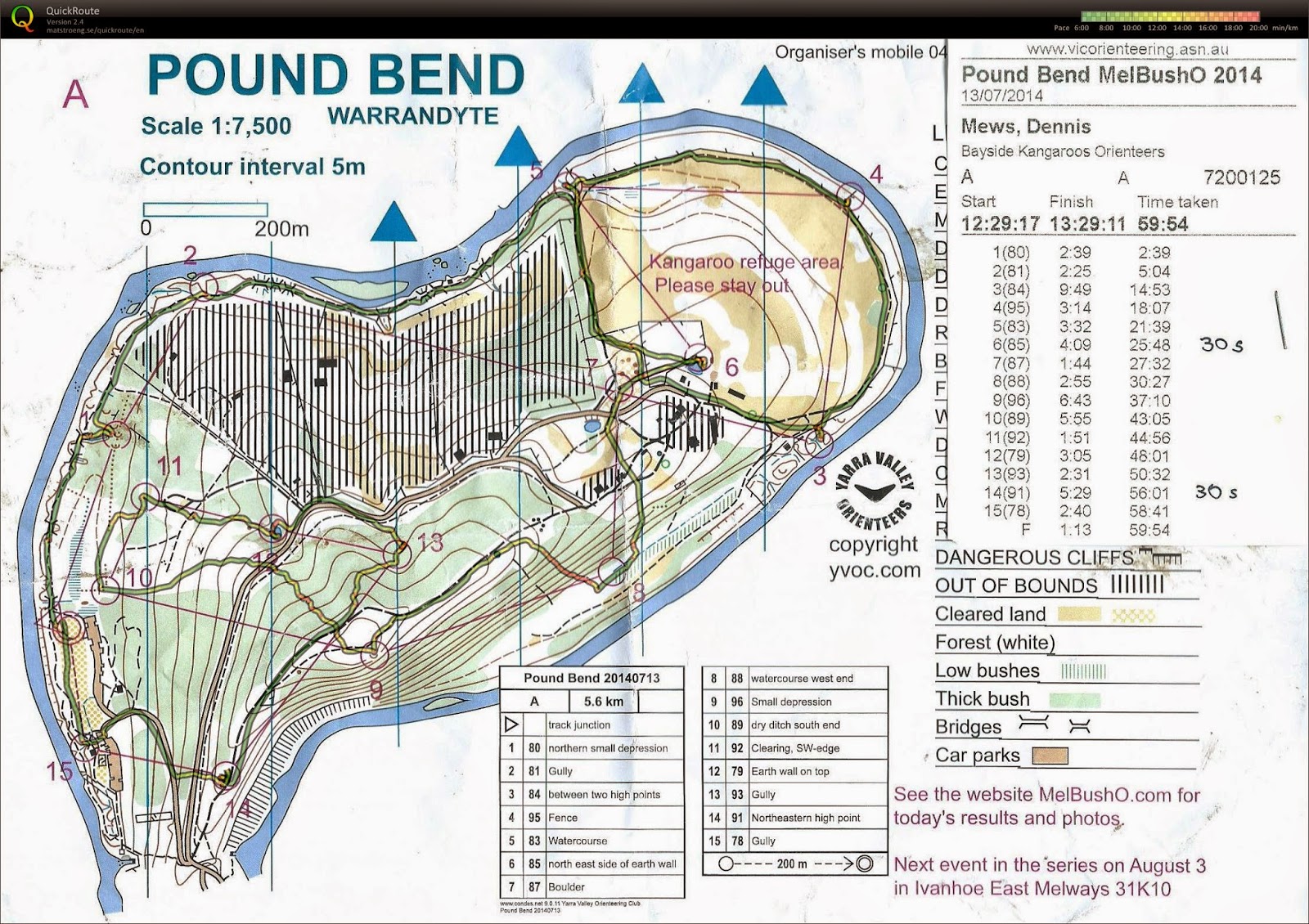 I legged it along the path to the first control, overtaking Pat on the way, and pushed it along to the second one. Nice and easy. Later splits examination showed I was barely in the top 30 at this stage. Maybe I will catch up later. Or maybe not. I lose a small amount of time at control 6 when I run past the flag, but find a good route down the steep slope to 8, only to then stagger back up the hill to the next control. This was as good as it got, with another small miss at control 14 before chasing a kangaroo (who clearly had not followed instructions) round the hill. I finished just inside the hour, well down the order, but ahead of some of my contemporaries. Scanning the results, I could see no-one ahead of me of similar vintage, which is my usual rule-of-thumb.

I enjoyed an event which had changes of vegetation, although the climbing was challenging. I calculated 145 metres of climb (most of it late on), with the course – nominally 5.6km – taking me 6.9km. Adjusting for the climb, that's 7.2 minutes/km. At my time of life, I'll settle for that.
Posted by Dennis Mews at 17:39 No comments: 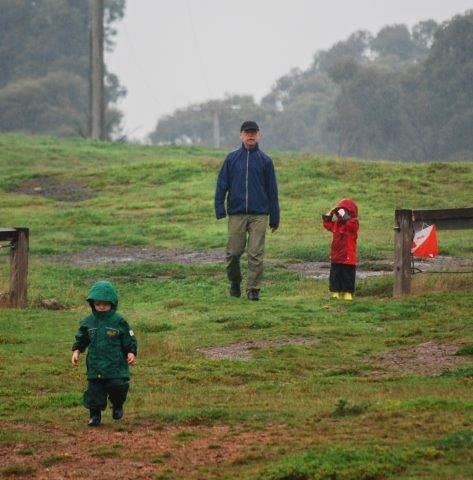 Orienteering continued this Sunday with a convenient 30 minute drive to Plenty Park, in not-so-convenient steady rain. We had arranged to amuse the children while Mark and Susi set off on their courses. We visited some control sites, investigated the dripping roof of the barbie area, fell over with starshapes in the wet grass, collected sticks and stones from all around, and all before ten thirty.

We handed Claudia and Max back to their parents and prepared for our courses. The rain by now was persisting down and threatened to become an important factor in our progress. Gloomy sky, muddy tracks, dripping trees - I was becoming almost nostalgic for the Old Country. Almost. My Big Boys course went well until halfway, when increasing foggy vision through my glasses forced me to regularly dry them on my shirt, itself becoming increasingly sodden. 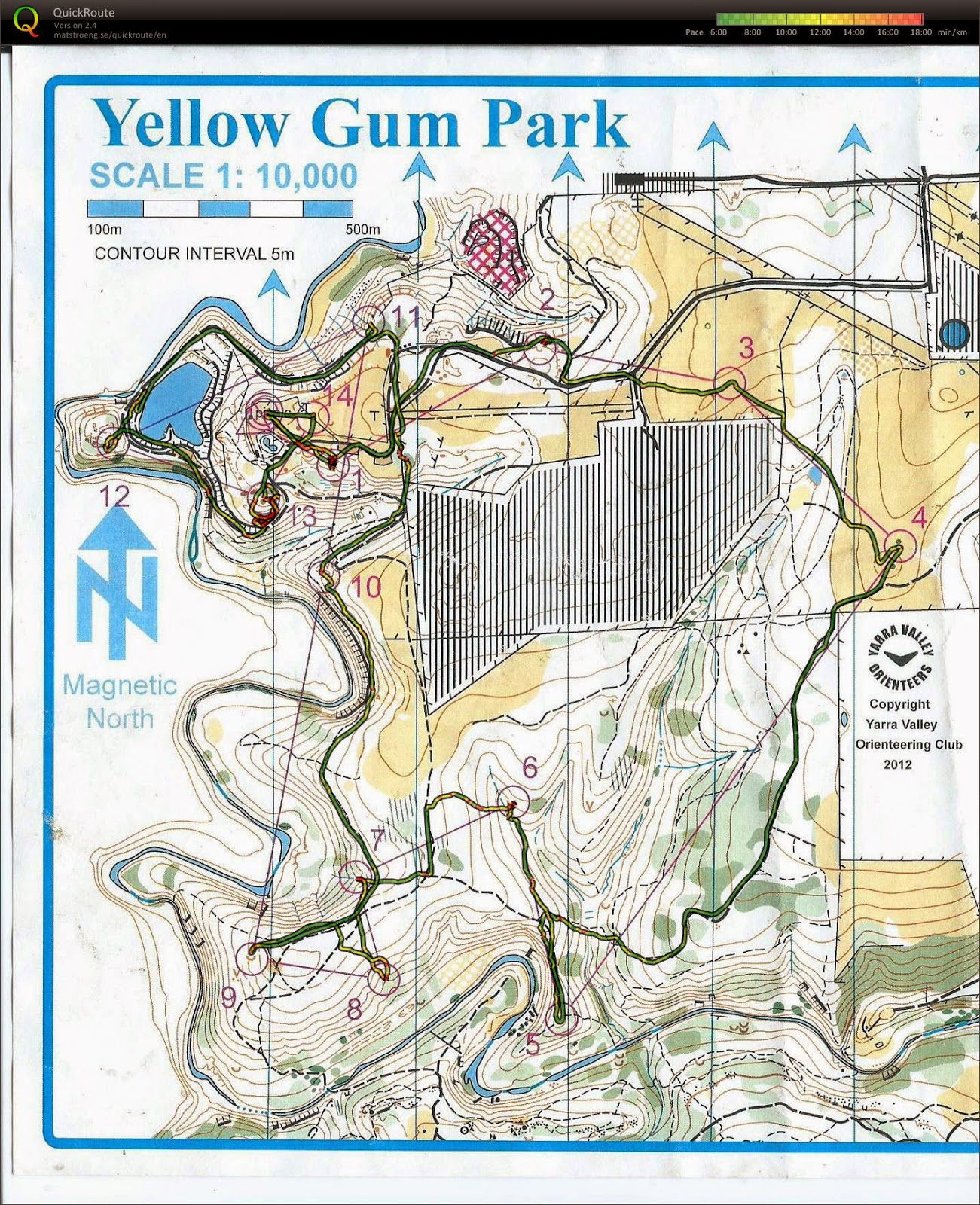 Of course, this couldn't go on and with only a couple of controls left, I found myself unable to read the map at all. Navigating by guesswork was never going to lead to a happy outcome and so it proved at control 13. Seven minutes inside the control circle, using my patented ever-increasing-circles technique, led me eventually to the elusive flag.

Overall, my result was a good one. My Clever Watch told me that 8.2 muddy kilometres distance with 220 metres of climbing had been covered in 73 minutes. A scan of the results showed several of my contemporaries ahead of me, although not by much, and certainly less than seven minutes! Cést la vie. Next time, of course, it will be different. Perhaps the weather will be more considerate.
Posted by Dennis Mews at 21:58 No comments: